Another year without our green gold, our Sicilian olive oil! Two years ago wildfires swept through Sicily which effected the production of olives in Sicily. Last year we had so few that they weren’t worth harvesting. This year – zero, “Proprio niente”. This means no Sicilian olive oil. We’re not alone of course. Everyone around Cefalu has had pretty much the same problem. Much as it may grieve us to be without our olive oil for the third year running, my heart goes out to all the locals for whom an absent or minimal olive harvest is a much more severe problem. 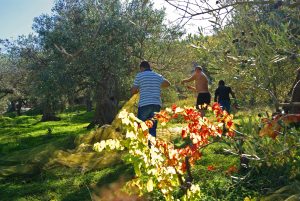 For us, and other friends from the UK, Scandinavia and elsewhere in Europe, the annual olive harvest is a great excuse, as if we needed one, to spend time in Sicily at the beginning of November. To eat, drink and be merry about our olives in Sicily. At the end of it, we usually have some of the delicious liquid “green gold” to last through the year for sauces and for cooking and, yes, just for dipping our bread in. If not, we’ve invariably had a great time anyway. And there’s always next year…

When I came to live in Italy almost 45 years ago, olive oil was something entirely new for me. By now I’m sure everyone knows that back then you could only buy it in the chemist in the UK, for putting in your ears if they were blocked. Was it “extra virgin, first cold pressing”? Somehow I doubt it. Friends and relatives back at home in the UK were somewhat surprised to receive cans and bottles of the real stuff as presents from me forty-four Christmases ago. I’m not sure they appreciated them back then, but they learned! Pity you can’t carry Sicilian olive oil in your hand baggage any more.

Now, of course, every supermarket in the UK has a shelf full of different olive oils. The choice can be bewildering. However, nothing can beat the oil from olives from Sicily that you have picked yourself and watch go into the press and come out of the tap at the other end. Us Brits love our potatoes baked in their jackets. There’s only one thing better than a baked potato, hot from the oven with a generous knob of melting butter, and that’s the very same potato drizzled with good olive oil. If you haven’t tried it, you don’t know what you’re missing. Next year is bound to be a bumper harvest, isn’t it? On a final positive note, staying on in Cefalu later into November this year meant that we were still here when Mocciaro started baking their panettoni. Oh, joy! Somehow we managed to find room in the suitcase for four of the beauties.