The undiscovered jewel of the Mediterranean

Cefalu lies in the Mediterranean

Cefalu a special place in Sicily

For those looking for a beautiful, undiscovered haven of tranquillity, a trip to Cefalù may be just what the doctor ordered.  Cefalu lies in the Mediterranean.  It is a city and a commune, located in Palermo, on the northern coast of Sicily. Cefalu is considered one of Palermo’s best seaside towns and one of the most beautiful villages in Italy.  There is much to do in this beautiful town, including taking in the gorgeous scenery.  The city is most well known for the medieval monuments at the base of La Rocca. You can also view our big collection of holiday villas in Cefalu and the Sicily Region.

La Rocca is known for the medieval monuments at the base of its large granite mass.  Climbing to La Rocca’s top can be quite tricky, but the views are astounding, and worth the exertion. On your way to the top of the rock, there are two choices. You can head straight up to see the castle’s ruin, which is at the pinnacle, or you can lead to the Temple of Diana, which is just a 20-minute trek. History says that this was once the acropolis Cephaloedium, with a temple dedicated to Hercules on top. At the very top of La Rocca, you will see some medieval fortifications and a former lookout tower today in ruins.  The view from here includes the skyline of Palermo and the Aeolian Islands.

Cefalu Duomo is a Roman Catholic church in Cefalu that is also known as The Cathedral-Basilica of Cefalu.  Built-in 1131, in the Norman style of architecture.  This is a simple but beautiful cathedral that encourages visitors. The cathedral’s interior is quite lovely. It features a mosaic apse and modern glass windows. The prophets and saints founded along the sidewalls, and there is a Norman baptismal font. The Duomo also features furnishings copied from the Byzantine style that was favoured by Constantine.  The mosaics are quite famous, and you will understand why when you see them. There are also some restaurants in this area, too, to complete your day’s sightseeing.

The Cefalu coast beaches are another of the city’s treasures.  The beaches are safe, clean and pristine; the waters are a pure, azure blue.  Along the coastline, you will also find some bars and trattorias.  They border the promenades all the way to Cefalu’s traditional town centre. The atmosphere is laid back, and the beaches tend to be less crowded as this is not your typical beach town.  The sand is perfect for sunset walks, or sunrise strolls.  The waters are perfect for swimming.

Santuario di Gibilmanna, or the Sanctuary of Gibilmanna, is a Christian shrine found in Cefalu.  This sanctuary is said to be one of the six Benedictine monasteries commissioned by Pope Gregory the Great. Many people make the pilgrimage to Cefalu to pray at the Sanctuary of Gibilmanna, more specifically, at this shrine to the Virgin Mary. The shrine’s coronation took place on August 17th, 1760 which was noted as the sanctuary’s official consecration.

The sanctuary constructed of many architecture styles: The current building underwent modifications during the Baroque period, while the façade you will see today done in 1907, after the original crumbled. Make sure to see the eleventh-century fresco, done in the Byzantine style, of the Virgin and Child. Located in one of the sanctuary’s chapels.

The shrine has two confirmed miracles, restoring sight to two blind worshippers and restoring speech to a mute.  The Vatican confirmed these miracles, which makes Santuario Gibilmanna one of the most important shrines in Sicily. Visitors are welcome to explore the memorial, and the museum located in the convent annexe — the museum dedicated to works of the Capuchin brothers.

Find your villa in Cefalu explores directly on our website.

Massimo Villas Selected as a Homes & Villas by Marriott

Who Have Written About Sicily... 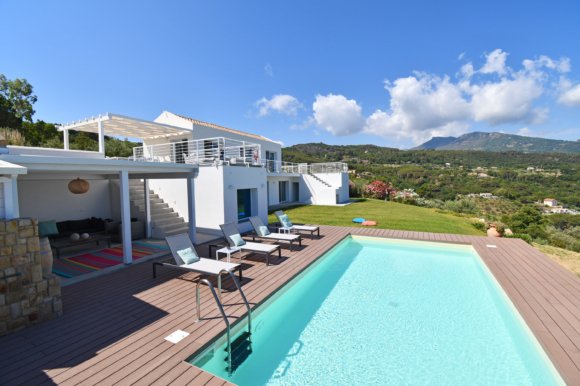